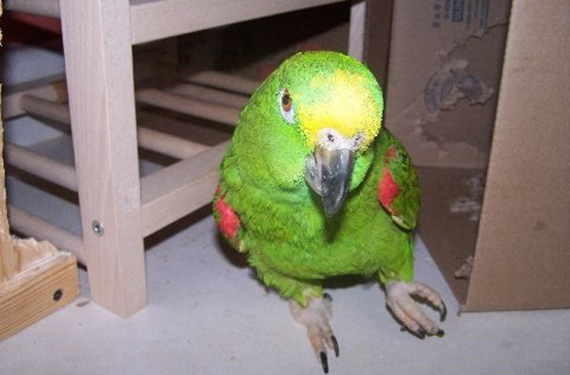 Pepper chose her new Mom and left her no choice but to adopt her. The first day she met her, Pep ran up her arm and stayed on her shoulder, refusing to move for anything! When she was fostered by her foster parents, visits were set up for her new Mom to come and spend time with her, until Rich and Karen were able to do the house inspection and she could stay home. That was in April of 2006.

Since then Pep or Per as she calls herself, has adjusted to her new family, the cats and her surroundings. She is much more active and has the run of the house. She loves ripping up her boxes and has made herself a playpen with a wine rack and a box. She loves taking car rides, talking all the way and singing along with the radio. She is starting to learn some Afrikaans phrases, since that is her family’s home language. She also is well-known at the local Starbucks, always greeting everybody very happily. After one year she has finally taken to her Mom’s son, albeit she uses him mostly to get taken to her mom. She does step up for him and sit by him when her Mom is not around or at work.

Pep came to the Rescue after her Dad fell ill and had to go to a nursing home. She had a wonderful life with her Dad; however the last year was emotionally very taxing on this amazing bird. She became distraught and sad. She did not like her Dad’s daughter, but this wonderful lady is a volunteer at the Refuge and gave Pep to Rich to put her up for adoption. That was where she found her Mom, who also volunteers at the Refuge. Pepper is a Yellow Fronted Amazon, and has an amazing vocabulary. She greets you very excitedly with a ‘Hi! How you doing? Good!’ She asks incredulously ‘What you up to Pep? Nothing!’ She laughs like an old man, and then says ‘Ahh’ in the sweetest voice. She warns you when she is going to bite, by saying ‘Auw!’ and if she bit you, she will say ‘Cut it out, Bad Girl!’

She gives out kisses, sometimes just blowing them in the air, other times she puts her beak right close to your mouth. She calls you, by saying ‘Pep, Come on!’ and she does not say step up, but ‘Come on!’ She says ‘Miaaw’ when she sees the cats, and she makes scary noises when she is scared or sees something strange. She also knows a couple of swearwords, we shall not repeat them here!

She loves to sit on the shower rail while her mom is showering, loves to be splashed with the drops of water, talking up a storm! She says ‘Bye’ when you leave the house, or if she is leaving. She says ‘See Ya!’ and ‘Going to the Store!’ when we are actually going to the Rescue. Yes, she loves to go to the Rescue and spends the whole time talking to everybody there! Then, in the evening, when she wants to go to bed, she will lean into her mom’s face, put her little beak close to her mom’s nose and hug her. Then she will step up, goes into her cage and say ‘Goody-doo’ in the sweetest little voice, before she goes to bed!

I am very happy to be the chosen one of this beautiful sweetheart and being the recipient of her wonderful hugs and kisses!

Thanks to Rich and Karen for giving me the opportunity to adopt and take care of this wonderful bird and also to enjoy all the birds at the Rescue!

Please read through the adoption steps and faqs before submitting an application.