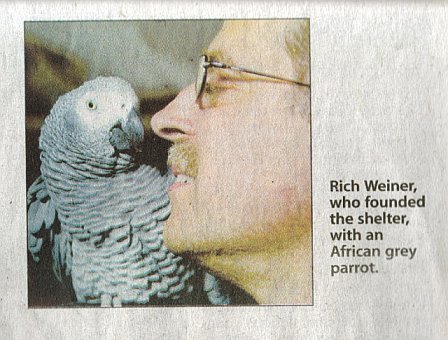 Rich Weiner's life is for the birds. So is his house. But he can't imagine having it any other way, he says.

From the outside, Weiner's Northbrook home looks like any nice, bilevel suburban house. But step inside and it is unlike any other interior the visitor has ever seen. The walls are lined, dining room, living room, kitchen, with large stainless steel cage after cage. Each is occupied by a parrot: African greys, umbrella cockatoos, the occasional oddball macaw.

But you are soon charmed by the singular sensation of having 70 birds, from atop their cages, or their doors, politely tell you "hello" as you walk by. Some begin to squawk, starting off a chain reaction until the noise level pierces the brain like an auditory ice pick. The cockatoos slowly lift their feathered crests, like gentlemen their hats as you pass. (Weiner says it can mean anything from excitement to aggression.)

Pardon the association, but it looks like a minimum-security prison for avian offenders. Actually, though, it's the only bird sanctuary of its kind in Illinois. It takes in abandoned, emotionally and physically handicapped parrots and tries to rehabilitate them and send them back out into the world.

Founder/director Weiner's day job is as a public-safety officer for the Village of Glencoe. But the birds are his lifework. He first became a parrot parent in 1988, when he acquired Prince, an African grey that is an expert at jimmying open kitchen cabinet drawers. Prince was joined shortly thereafter by an umbrella cockatoo named Ninja.

Weiner began bringing the birds to work. Then, "friends and business associates brought me unwanted birds, and I started finding homes for them," and veterinarians began calling him to take parrots abandoned at their clinics off their hands.

Next thing he knew, he had a not-for-profit organization, "A Refuge for Saving the Wildlife Inc.," accredited by the Association of Avian Rescue Organizations and licensed by the Illinois Department of Agriculture, Bureau of Animal Welfare.

He started off with 16 birds. Today his main facility and three foster homes can serve about 50 to 70 birds. But his goal for the shelter is to eliminate its existence. He plans to do it by educating the public about proper parrot keeping. His shelter motto is "Don't Buy, Don't Breed, Please Adopt a Bird in Need."

That mantra riles the feathers of some bird fanciers. But it has come home to him that there are many more of these highly intelligent birds than lifelong loving homes. And the problem is growing. Within the last two decades, aviculture has gone from a small hobby to a multimillion-dollar industry. There are now something like 6.9 million bird-keeping households in the U.S. that claim an estimated 19 million pet birds.

"Breeders are creating birds faster than the developing market can sustain the birds," Weiner said. "The consumer is misinformed that birds are low maintenance and that only young or baby birds can bond with a human. As a result, too many ill-equipped people are acquiring birds with life expectancies of 60 to 100 years.

"People had budgies as kids and they think, how hard could one of the bigger birds be? The stores don't educate people as to what the birds actually need," he added.

Lynne Bailey of Chicago adopted an African grey named Bongo Bailey from the shelter. But she became a volunteer there first, knowing she wasn't ready.

"Rich has high standards for the care of birds, so you learn good animal husbandry," she said. "People buy the birds because they're pretty," admittedly irresistible. "But you need to know about the mess they make and the noise they make. Cockatoos are the noisiest. They need to be babied constantly and when they're not, they scream."

Sometimes they nip too. Paco, a shelter bird who sings opera, bit Bailey's hand, then flew over to a T-stand where he vocalized a guilty "Uh-oh," she remembered with a laugh.

But what about the neighbors? Don't they complain about noise? Weiner said no. In fact, he said, "most neighbors will bring their family and friends from out of town over here to take pictures with the birds." No marital complications either; Weiner is single. 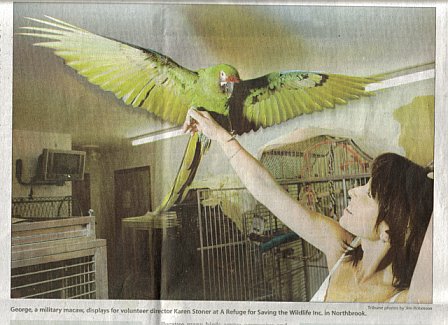 Karen and Georgie, biggest bird at the Refuge

Because many birds arrive aggressive and stressed out, Weiner has to be a bird shrink.

"We try to fix what's wrong with them, work through all their bad habits," he said. "Sometimes the damage can't be undone and they become permanent residents of the refuge. Some of the birds at the refuge have special needs, including a range of physical handicaps or other changes requiring unique living or feeding arrangements." Like one of the cockatoos who wears a pink sweater over his featherless torso. "That's what living 35 years with a smoker will do," Weiner said.

Others have been bounced from home to home, have often been physically and/or emotionally abused, and have become too fearful of people to be pets any longer.

But many come around, like Rocky, a big Moluccan who had been relegated to a cage for four years straight.

"It took a year and a half before I could touch him," Weiner said. "You have to work on that relationship every day, work on trust. I have to see what their fears are. We have to work with that aggression." As he talked, he intermittently kissed on their beaks the birds that landed on his shoulder.

One other thing about parrots is, they may outlive you. "They can live up to 80 to 100 years, unlike the parakeet, which lives only 15," Weiner said. "Once they understand this is the 2-year-old forever and they can make that commitment," he said, people might qualify as a good parrot parent.

In 2006, the refuge had a monthly overhead of $3,600 to $4,500 including food, housing, medical care and toys, so donations are welcome. Volunteers also are needed.

If you want to feather your nest by adopting a parrot, you might not have to give up as much as Rich Weiner has -- he occupies only a small room on the second level of his house/shelter -- but here are some things to consider:

Education: Before buying or adopting, volunteer at a shelter for a while. Talk to bird owners, read, join Internet groups to learn all you can.

Housing: Buy a good cage from the start instead of buying inexpensive ones and replacing them over the years. Proper cages can be expensive, from $500 up to $1,200. Check out Windy City Parrot, 312-492-9673) for what proper cages look like and cost. Don't stint on toys. They are not an indulgence but a requirement for avoiding boredom.

Not all talk: The biggest abuse is through neglect, Weiner says. Keep expectations realistic. "At first [new owners] think that the birds are going to talk to them all the time. They squawk and scream instead and the person yells at them for squawking, which is positive reinforcement of negative behavior," he said. "They squawk some more. The bird got what it wanted, it got attention. So the person covers the cage, puts the cage in the back room."

Social contact: Birds need social contact and lots of stimulation, even listening to radio or television. And they can become jealous. "Birds do bond with people, but be aware when the bird has to share its primary person with a significant other that is coming into the relationship, it calls for tact for there to be a smooth transition," Weiner said.

Veterinary care: Good care from an avian veterinarian is important and can be expensive. Birds need annual physical examinations and vaccinations. Grooming needs include having wings and nails clipped.

In the Web edition

For more on birds and other pets, check out Unleashed, the Tribune's pets blog. 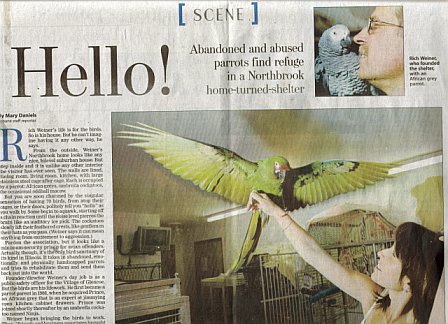 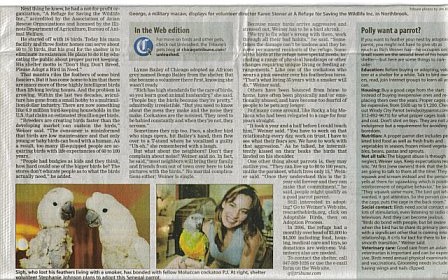